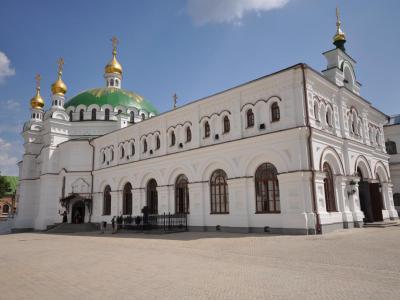 The outside architecture shows elements of antique Byzantine style (large, sturdy dome), while the marble icons, decorating the interior, are Neoclassic. The interior paintings, done by a group of local painters under the leadership of Ivan Yizhakevych, reflect Modernist influences.

Imperial Russia's Prime Minister, Pyotr Stolypin, assassinated in Kiev in 1911, was buried at the Pechersk Lavra with the religious service held at the Refectory Church.

The location offers visitors spectacular views of the Far and Near caves, as well as of the nearby Dnieper river. Shadows of the city, stretching over the opposite bank, add more charm to the setting.
Image Courtesy of Flickr and Jorge Láscar.