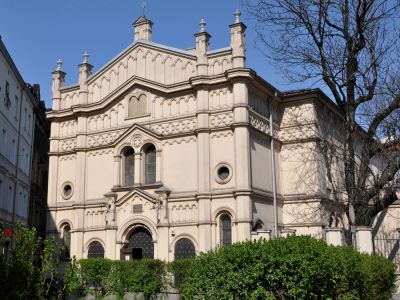 The Reformed Temple Synagogue located in the Kazimierz district is a unique example of the merger of Jewish and Polish cultures. The synagogue built in the late 19th century depicts the grandeur and freedom of the Jewish community before the World War II.

This beautiful building designed by architect Ignacy Hercok, best illustrates the neo-Renaissance or the Moorish Revival style of architecture. The rectangular building with its tall central section is said to have drawn inspiration from Leopoldstädter Tempel in Vienna, Austria. More impressive than the exteriors, the insides of the building can surely take your breath away. Adorned with stained glass windows, exquisite gold leaf that decorate the ceiling and walls, the golden wooden gallery, the interiors of the synagogue are truly impressive. The synagogue is probably among the few which doesn’t segregate the audiences according to their gender and also among the fewer that offer services in Polish, Hebrew and German.

The temple faced its darkest years during the World War II when German troops used the building as an ammunition storage area. The structure suffered a lot of damage during the War and was only restored in 1995. For its architecture or interiors or just simply its place in the history of Krakow, the Synagoga Tempel deserves a visit.
Image Courtesy of Flickr and bazylek100.
Sight description based on Wikipedia.