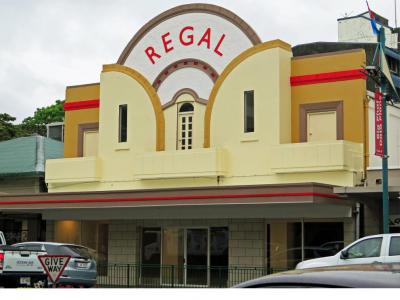 According to a February 22, 2021 Fiji Sun article, the Regal was the original flagship theater of the Damodar Cinemas in Fiji—one of the preeminent cinemas in town. It was air-conditioned, which was unusual for the era. In 1997 the theater closed its doors and was transformed into an arcade, filled with coin-operated games. The building was further converted, into a two-story retail outlet, in August 2019. A second-hand women’s clothing store currently occupies the bottom floor, while a men’s shop, along with the book section and the Catch Up Café, are on the top.

The architecture of the Regal Theater is art-deco and modernist design, a style that was popular in Australia, Britain and the USA. Built around 1920, the edifice characteristically includes vertical, zigzagged elements and round-fanned geometric art deco features. The front-facing symmetrical exterior has two bays, fronting walls and minimal elements flanking the main primary decorative and centralized bay. Balconies for each bay extend above the street level veranda. In general, the architect also may have been influenced by Cubism, Constructivism, Modernism and Futurism – movements in vogue during the 1920s.

If you continue walking down Scott Street, on your right-hand side you will find Ratu Sukuna Park. The boundary of this park, at the junction of Gordon Street and Scott Street, marks the beginning of Victoria Parade.
Image Courtesy of Robert Kay.