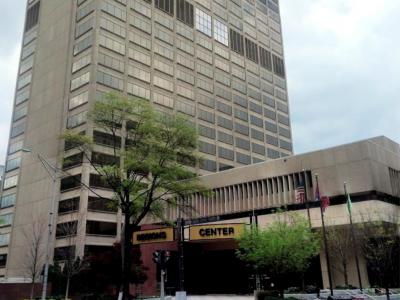 It is the Tennessee headquarters of Regions Financial Corporation. It was completed in 1974. The building was originally called the First American Center but the name was changed when First American National Bank merged with AmSouth Bank. A major renovation of the building's ground-level exterior followed the name change. The name then changed again to Regions Center when AmSouth merged with Regions.

The building serves as the Tennessee headquarters and a branch office for Birmingham, Alabama-based Regions Bank. It is also home to many non-related businesses who lease space in the upper floors. It was once the main office and headquarters of First American National Bank. AmSouth acquired the slightly larger First American National Corporation in 2000 after the latter involved itself in several unprofitable mergers. On May 25, 2006, AmSouth announced it is merging with Regions Financial. It is unknown at this time what the new company's presence will be in the building.

A relatively small parking garage is located beneath the building exclusively for the benefit of customers visiting the bank's branch. The site received national attention in 1971 when remains of a saber-toothed tiger were discovered during excavation of the property.