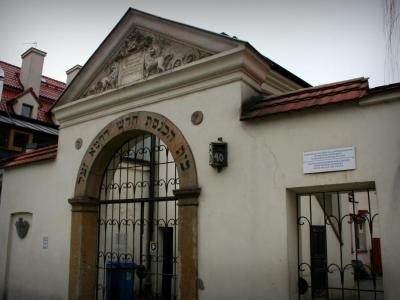 The Remah Synagogue (Polish: Synagoga Remu) is a 16th-century Jewish temple and the smallest of all historic synagogues in the Kazimierz district of Kraków, Poland. The synagogue is named after Rabbi Moses Isserles (c.1525–1572), known by the Hebrew acronym ReMA (רמ״א, pronounced ReMU) who's famed for writing a collection of commentaries and additions that complement Rabbi Yosef Karo's Shulchan Aruch, with Ashkenazi traditions and customs. It is currently one of two active synagogues in the city.

According to one popular tradition Israel ben Josef, the grandson of Moshe Auerbach of Regensburg, founded the synagogue in honor of his son Moshe Isserles, who already in his youth was famed for his erudition. A more plausible motive for the synagogue's origin stems from the Hebrew inscription on the foundation tablet that implies that the synagogue was built in memory of Malka, the wife of Israel ben Josef.

Originally called the "New Synagogue" to distinguish it from the Old Synagogue, (Stara Bożnica), the Remah Synagogue was built in 1553 at the edge of a newly established Jewish cemetery (today known as the "Old Cemetery") on land owned by Israel ben Josef. The original late Renaissance style edifice underwent a number of changes during the 17th and the 18th centuries. The current building traces its design to the restoration work of 1829, to which some technical improvements were introduced during the restoration of 1933 conducted under the supervision of the architect Herman Gutman. During the Holocaust, the synagogue was sequestered by the German Trust Office and served as a storehouse, having been despoiled of its valuable ceremonial objects and historic furbishing, including the bimah.

The Old Jewish Cemetery, more commonly known as the Remah Cemetery is a historic necropolis established in the years 1535–1551, and one of the oldest existing Jewish cemeteries in Poland. It is situated beside the 16th-century Remah Synagogue. The cemetery bears the name of Rabbi Moses Isserles, whose name is abbreviated as Remah.

The cemetery was closed in around 1850; the nearby New Jewish Cemetery at 55 Miodowa Street then became the new burial ground for the city's Jews.

During the German occupation of Poland, the Nazis destroyed the site by tearing down walls and hauling away tombstones to be used as paving stones in the camps, or selling them for profit. The tombstone of the Remah (Rabbi Moses Isserles) is one of the few that remained intact. The cemetery has undergone a series of post-war restorations. As is common in contemporary Poland, all original tombstones unearthed as paving stones have been returned and re-erected, although they represent a small fraction of the monuments that once stood in the cemetery.

The cemetery holds the gravesites of many notable Polish Jews, including:

- Rabbi Moses Isserles, whose name is abbreviated as Remah, (ca. 1525-1572), buried there along with his family;
- Nathan Nata Spira (1583-1633), Kraków rabbi and head of the Talmudic Academy from 1617 to 1633;
- Rabbi Yom-Tov Lipmann Heller, (1578-1654), a Bohemian rabbi and Talmudist, best known for writing a commentary on the Mishnah called the Tosafot Yom-Tov.
- Yossele the Holy Miser, central figure in a well-known tale of Jewish folklore.
- Avraham Yehoshua Heschel, Chief Rabbi of Kraków.
- Izaak Jakubowicz, donor of the Izaak Synagogue,
Image Courtesy of Flickr and Juan Antonio Segal.
Sight description based on Wikipedia.