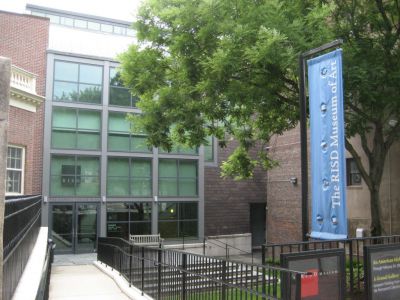 The Rhode Island School of Design Museum is the 20th largest art museum in the United States. The museum was founded in 1877, but the current structure was opened in 2008. The Chace Center, named after Malcolm and Beatrice Oenslager Chace, connects the four older buildings with a glass bridge.

The museums has a collection of approximately 100,000 objects from around the world. Ancient art in the form of bronze sculptures, stone sculptures, mosaics and Greek coins are on display. One of the most notable is a Hellenistic bronze Aphrodite. Another must-see exhibit is that of the Ptolemaic period coffin and mummy of the Egyptian preiest Nesmin.

The museum houses over 700 19th-century Japanese prints. Also in its Asian collection is a 12th-century wooden Buddha. It is the largest Japanese wooden sculpture in the United States.

The museum offers a great deal of contemporary art from artists like Franz Kline, Roy Lichtenstein and Andy Warhol. Other artists represented at the museum include Picasso, Monet, Manet, Paul Revere, Van Gogh and Chanel. It also has a number of pieces from Rhode Island artists.

Tickets must be reserved in advance through the museum website. The museum is open on Tuesday through Sunday. Tickets are free on Sundays and from 5 PM to 7 PM on Thursday and Friday.
Image Courtesy of Wikimedia and Infrogmation.