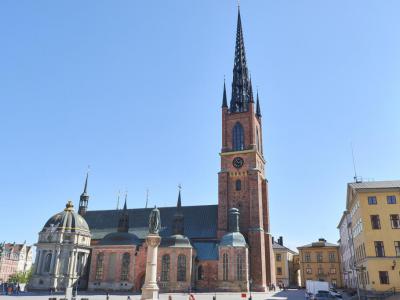 The historic Riddarholm Church dates back all the way to the 13th century. Originally, it was built with two naves but, by the 1400s, one additional nave was added. This church facility represents the last abbey left in Stockholm and is a product of the Protestant Reformation in Sweden.

The place itself has been used as a funeral and memorial church since 1807 and is known for being the final resting place of many Swedish Royal family members. In fact, several chapels here are dedicated to the various kings of Sweden, whose remains rest within. In the chapel of Gustavus Adolphus Magnus lie the bones of Gustav II in a large marble sarcophagus, while the lower crypt holds the bodies of his decedents. The Karolinska Chapel was built in the 17th century and Karl XII is buried beneath a black marble sarcophagus along with his family, while the Bernadotte Chapel honors Karl XIV Johan. The Royal Graveyard at Haga holds remains of other members of the Royal family, while the Haga Wall displays the elaborate shields of the Royal Family members buried in the graveyard.

Why You Should Visit:
Interesting spire and external architecture – the history of Royal Sweden in this one building.

Tip:
Try to catch a guided tour (included in the entry fee) which lasts ~45 mins but makes the visit a lot more informative.