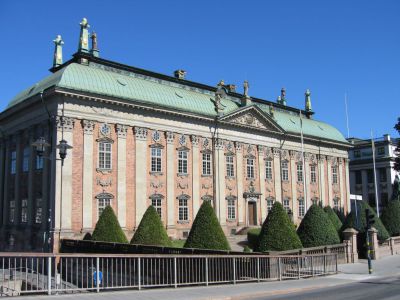 As of 2003, the House of Nobility (Riddarhuset) has been a private institution which maintains records and acts as an interest group on behalf of the Swedish nobles. Following 1866, when the old Parliament of the Estates was replaced by the then newly established Parliament of Sweden, it has been regulated by the Swedish government. This quasi-official representative body is also authorized to dole out noble titles, such as count, baron, esquire or knight.

Its name literally translates to “the house of knights”, as knights (riddare) belong to the higher ranks of the Swedish nobility, sometimes at par with counts (greve) or barons (friherre). This tradition dates back to the Middle Ages when Sweden, under the Kalmar Union, had only one knight, Sten Sture. All esquires in the country are also represented here; most of them being the so-called “untitled” (obetitlad adel).

The building itself was constructed in the mid 1600s, designed by French-born architect, Simon de la Vallée, who started the planning, but was killed by a Swedish nobleman in 1642. The construction was finished by his son, Jean de la Vallée, in 1660.

Throughout the centuries, the building has served multiple purposes. Between the 17th and the 19th century it was a chamber in the Riksdag of the Estates, the Swedish equivalent to the British House of Lords. In the 18th century, it often hosted public concerts, as well as parliament meetings and those of the Academies of Sciences and Literature.

The coats of arms of Swedish noble families are vividly displayed throughout the building. The ceiling is emblazoned with the allegorical painting of Mother Svea by David Klöcker Ehrenstrahl.
The south end of the building features Latin inscription CLARIS MAIORUM EXEMPLIS, along with a statue of Gustav Vasa.
Image by Allsong on Wikimedia under Creative Commons License.
Sight description based on wikipedia