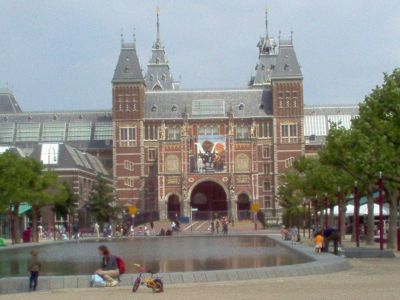 Standing tall on the Museumplein in Amsterdam is one of the most renowned museums not only in the Netherlands but the entire world. The Rijksmuseum is known to have over a million pieces of artifacts and art pieces that comprise most of its permanent collection.

Founded in the 1800s, the birthplace of Rijksmuseum which was initially called the National Art gallery was The Hague. It was later moved to Amsterdam on the commands of Louis Bonapart, the King of Holland. On its arrival in Amsterdam, it was named the Royal Museum and it was not until 1885 that the Rijksmuseum shifted to its current location, the beautiful Dutch Neo-Renaissance building.

The unique blend of Gothic and Renaissance architecture on the Rijksmuseum structure was brought about by architect Pierre Cuypers. The resultant building was not only handsome looking but was also quite huge. This was done with the sole purpose of fitting the entire collection brought from The Hague.

The Rijksmuseum has a massive collection of art, history, and manuscripts that date back to the 17th century. The museum is a must-see if you want to stare in awe at Rembrandt’s works, as well as other renowned artists like Johannes Vermeer and Frans Hals.

Why You Should Visit:
The place where the Art from your Art classes and books comes to life.

Tip:
Look until you drop, then take a break from all the art and artefacts in the excellent atrium café and get ready to do another wing.
Consider buying your ticket online (it is valid for one year and will save you a long queue).