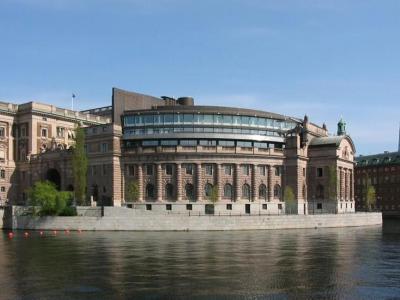 The Parliament House (Riksdagshuset) is the seat of the Swedish parliament, the Riksdag. Even though the building is more modern compared to some of the nearby structures, the influence of the local Baroque Revival and Renaissance style is evident in its centered facade section and throughout the structure. Built between 1897 and 1905, the complex was designed by Aron Johansson with the only stipulation made to him that it should not outshine the Royal Palace.

The two buildings of the complex were originally intended to house the Riksdag in one, and the Sveriges Riksbank (Swedish National Bank) in the other, of a semicircular shape. However, after the bicameral Riksdag was replaced by a unicameral legislature in 1971, and the bank relocated, the latter building was converted to house the new Assembly Hall.

Located on the island of Helgeandsholmen, the building is flanked by water and is impressive on the horizon, especially at night. On the eastern part of the island, visitors will find restaurants, which have been serving the local cuisine since 1832, along with an exquisite public park, offering incredible views of the Riksdag and the surrounding landscape.
Image by Andreas Ribbefjord on Wikimedia under Creative Commons License.
Sight description based on wikipedia