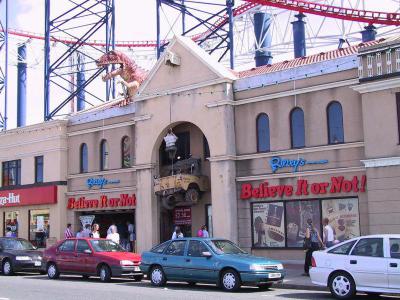 Ripley’s Believe It or Not!, Blackpool (must see)

Ripley's Believe It or Not! is a franchise, founded by Robert Ripley, which deals in bizarre events and items so strange and unusual that readers might question the claims. The Believe It or Not panel proved popular and was later adapted into a wide variety of formats, including radio, television, comic books, a chain of museums and a book series.

The Ripley collection includes 20,000 photographs, 30,000 artifacts and more than 100,000 cartoon panels. With 80-plus attractions, the Orlando-based Ripley Entertainment, Inc., a division of the Jim Pattison Group, is a global company with an annual attendance of more than 12 million guests. Ripley Entertainment's publishing and broadcast divisions oversee numerous projects, including the syndicated TV series, the newspaper cartoon panel, books, posters and games. When Ripley first displayed his collection to the public at the Chicago World's Fair in 1933, it was labeled Ripley’s Odditorium and attracted over two million visitors during the run of the fair. In 1950, a year after Ripley's death, the first permanent Odditorium opened in St. Augustine, Florida.
Image Courtesy of Flickr and Stinkie Pinkie.
Sight description based on Wikipedia.