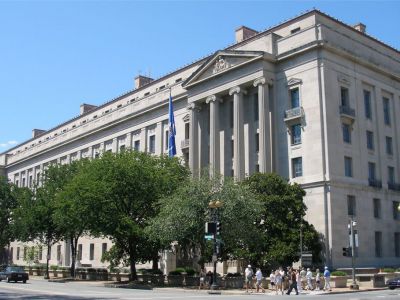 The Robert F. Kennedy Department of Justice building is one of the most recognizable edifices in Washington D.C. Trapezoidal in shape, it stands at the intersections of Pennsylvania Avenue, Constitution Avenue, 9th Street and 10th Street NW, and forms part of the Federal Triangle, being very close to the National Archives and the Internal Revenue Service Building. The physical address is 950 Pennsylvania Avenue NW, and you can get to the location quickly from the National Mall or the J. Edgar Hoover Building.

Back in the early 20th century, the Department of Justice needed a home and The United States also needed a place to house the Attorney General’s Office. The need was finally met in 1935. The architectural firm responsible for the design was Zantzinger, Borie and Medary of Philadelphia, PA who made good use of the modern Art Deco style that is seen in many of the buildings in the area. In addition to its unique shape, the building is also noted as a wonderful example of the so-called “Classical Revival” architectural style.

In 2001, the United States Congress passed legislation to rename the location after Robert F. Kennedy, who was the 64th Attorney General of the United States.
Image by Coolcaesar on Wikimedia under Creative Commons License.