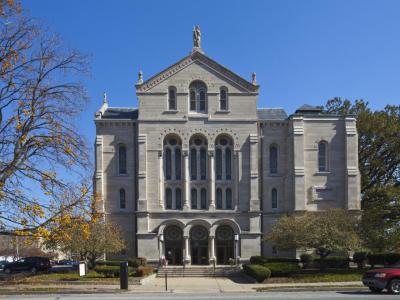 Roberts Park United Methodist Church, located downtown, is affiliated with the University of Indianapolis. It is named after Robert R. Roberts, the first Bishop of the Methodist Episcopal Church to reside in Indiana. This building at the corner of Vermont and Delaware streets was erected in 1869.

The Church was dedicated on August 27, 1876, making it the oldest church remaining in downtown Indianapolis. Diedrich A. Bohlen, a German-born architect who immigrated to Indianapolis in the 1850s, designed this early example of Romanesque Revival architecture. The church is considered one of Bohlen's major works. Constructed of Indiana limestone, it has a rectangular plan and includes a bell tower on the southwest corner. The church is known for its interior woodwork, especially a pair of black-walnut staircases leading to galleries (balconies) surrounding the interior of three sides of its large sanctuary.

The bell tower has rounded-arch windows at the first and third level. The second level has a tablet inscribed with the church's name and its construction date. A pyramid-shaped room tops the tower, which houses the church's bell.

The church was added to the National Register of Historic Places on August 19, 1982.
Image Courtesy of Wikimedia and Diego Delso.
Sight description based on Wikipedia.