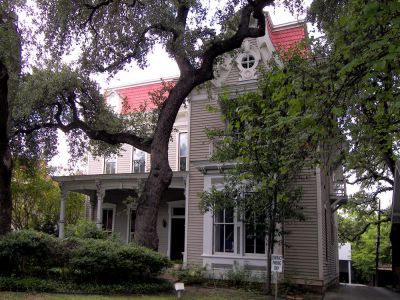 Built in 1876 for the family of Elizabeth and John Robinson Sr., this two-and-half-story farm house is a fine example of the Second Empire style of architecture coupled with Italianate detailing.

Located within the original 1839 Austin town plan drawn by Edwin Waller, it is in close proximity to the house built by the locally prominent Bremond family. It shares stylistic similarities with the Bremond house, now preserved as the Bremond Block Historic District. The Robinson's son, Eugene, purchased the house from the other Robinson heirs in 1902. The house was then bought in 1928 by Joe and Bridget Macken, in whose family it remained until 1983. Both John Robinson and Joe Macken were Austin community leaders, serving at different times as chief of the volunteer fire department and city alderman. Prominent features of the l-plan Robinson-Macken house include projecting bay windows with classical detailing, fine milled wood elements, dormer windows, and a mansard roof.
Image by Larry D. Moore on Wikimedia under Creative Commons License.
Sight description based on wikipedia