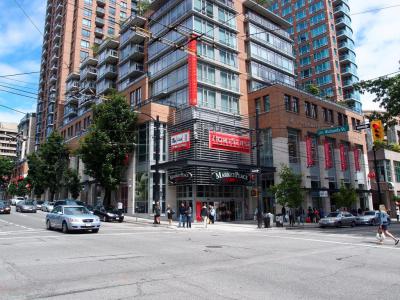 Robson Street is a major southeast-northwest thoroughfare in Downtown and West End of Vancouver. Its core commercial blocks from Burrard Street to Jervis were also known as Robsonstrasse. The name honors John Robson, a major figure in British Columbia's entry into the Canadian Confederation, and Premier of the province from 1889 to 1892.

Robson Street starts at BC Place Stadium near the north shore of False Creek, then runs northwest past Vancouver Library Square, Robson Square and the Vancouver Art Gallery, coming to an end at Lost Lagoon in Stanley Park.

In 1895, train tracks were laid down the street, supporting a concentration of shops and restaurants. From the early to the middle-late 20th century, and especially after significant immigration from postwar Germany, the northwest end of Robson Street was known as a center of German culture and commerce in Vancouver, earning the nickname Robsonstrasse, even among non-Germans (this name lives on in the Robsonstrasse Hotel on the street). At one time, the city had placed street signs reading "Robsonstrasse", though these were placed after the German presence in the area had largely vanished.

Why You Should Visit:
Vibrant area in the heart of Downtown. No end of bars/restaurants and suchlike, as well as the odd quality supermarket.
The variety of (mostly Asian) restaurants available is impressive, with several having significant queues outside.
This is the heart of the city; a lovely place to wander on down.

Tip:
When hunting for a hotel, try to find one on or accessible to Robson Street for your first time in Vancouver.
Image by Guilhem Vellut on Flickr under Creative Commons License.
Sight description based on wikipedia