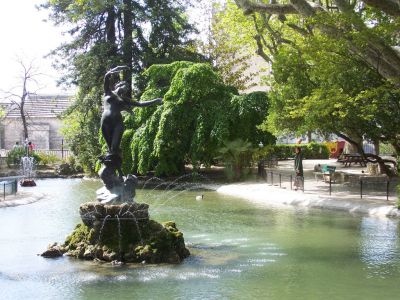 An oasis above the overheated crowds in palace of the Popes square, on the top of Doms Rock, are the shady gardens of Doms Rock Gardens.

There are great views of the Rhone River and all of the Rhone plain. From the overlook platform one can see the St Benezet Bridge and Fort St-Andre.

The park is a green space of 95,000 square feet. There is a large carp pond with resident geese. In the center of the pond is a stage of Venus with swans. Venus is nude. She had to be moved from another park in 1894. There is a cafe by the pond. One can have a drink and watch Venus with her swans.

Doms Rock Gardens is an island of limestone standing 100 feet above the Rhone plain. It became a fortified oppidum and a citadel for the Roman settlement. The citadel was eventually replaced by a chateau and in the 14th century the Palace of the Popes appeared.

Doms Rock Gardens can be reached via stairway from Avignon Cathedral or by way of St Anne's steps. However, there is also a small train that will carry one to the garden gates.
Image Courtesy of Wikimedia and Paul Munhoven.