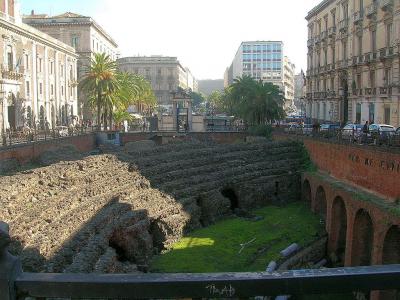 Only a piece of it can be seen. It is close to the Stesorico Square. It is a part of the exhibit of the Greek-Roman Archaeological Park of Catania. It was an elliptical arena with radial walls and vaults to support the seats.

A gallery with a facade encircled the exterior. The ellipse of the arena had a large diameter of 268 feet. The small diameter was 164 feet. The outside diameters were 478 feet and 345 feet. The outside circumference was 1,015 feet. A respectable size overall. The materials used in the walls show some degree of recycling.

Seating capacity was about 15,000. More could have been accommodated by adding standing room only bleachers of wood. The theatre was able to stage sea battles, making use of the city's aqueduct. An iron gate is presently used for access. Two ionic columns flank the gate and support an architrave with the inscription, "Ampitheatrum Insigne".

Legend has it that the theatre was spared burial by lava in the eruption of Mount Etna in 251. It was in that year Saint Agatha died. Her spiritual intervention might have saved many. However, the lava stopped before reaching Catania. There is no evidence she favored sports arenas, but then she did favor Catania.

In 1693 the arena was buried by the earthquake of that year. Giovanni Gioeni used rubble to build homes and a neo-classical facade for the Church of San Biagio. The ground that buried the amphitheater was used as a garden. The amphitheater of Catania had just disappeared. It reappeared in excavations of the 1700s.

Only a tenth of the amphitheater is visible today.
Image Courtesy of Wikimedia and Burgundo.