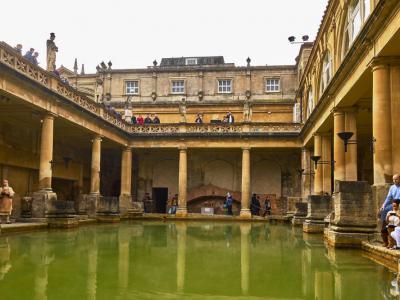 The Roman Baths are Bath’s most famous tourist attraction. A beautifully preserved relic of the town’s foundation as a Roman settlement, the baths lay ruined for centuries prior to extensive restoration in the 18th century. Now fully restored, they are one of the world’s only examples of naturally heated swimming baths – although you can no longer swim in them! The Roman Baths as a visitor attraction is divided into four sections – the Sacred Spring, the Roman Temple, the original Roman Bath House, and a museum which exhibits the remarkable array of Roman artifacts found within the site. The Roman Baths lie below street level, and are housed in elegant Georgian buildings. The site is Grade 1 listed by English Heritage, and attracts over a million visitors each year.

The Baths are situated in the square next to Bath Abbey, in a historic corner of this famous city. Opening hours vary throughout the year, with the baths generally open from 9.30am until 5.30pm, with later opening times in the summer months. Adult admission is £12.25, with concessions for senior citizens and children. Prices may be marginally higher in July and August. There are a number of package deals available, including a family ticket for two adults and two children, available for £35. Packages that also allow entry to the redeveloped Thermae baths nearby are available from £65.
Image by Arpingstone on Wikimedia under Creative Commons License.
Sight description based on wikipedia