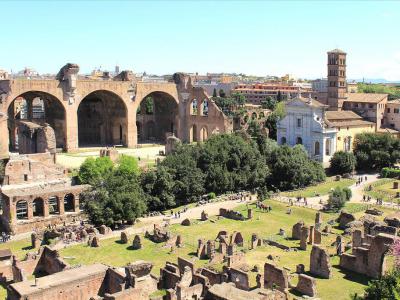 Perhaps one of, if not *the* most celebrated meeting spot in the world of all times, the Roman Forum, for centuries, had been the nerve center of ancient Rome's public life.

It is believed that people first gathered here around 500 BC, initially for day-to-day trading at a marketplace. Over the next few centuries, as more activities started to take place here, such as voting, public speaking, social gatherings, criminal trials, gladiator matches, religious ceremonies and business deals, this small valley between the Palatine and Capitoline hills gradually turned into a multi-purpose hub filled with buildings, arches, streets and monuments.

The ancient Romans were incredibly well organized and the placement of sites within the Forum still makes a lot of sense even today. The best-known sights here include the Senate House, the Temple of Saturn, the Arch of Titus, the Temple of Vesta, the Rostra, the Temple of Castor and Pollus, Via Sacra, and others.

Unlike the Imperial Fora modeled on an ancient Greek town square, the Roman Forum developed gradually and organically. It was reconstructed many times throughout the existence, attesting to which are the traces of influence of different architectural styles from different periods. Most of the ancient Forum was destroyed in the 5th century AD, around the time when the Roman Empire fell into decline.

Even though now reduced to crumbling ruins, the Forum still remains a historic relic of incalculable value attracting annually some 5 million visitors.

Allow yourself sufficient time to explore this location, as you may find it captivating and be eager to see more of it as you go. It is also recommended to wear sunscreen and comfortable shoes, plus to carry a bottle of water.

***Movie "ROMAN HOLIDAY": Joe Encounters Ann***
The Roman Forum would be a convenient place for Princess Ann and Joe Bradley to meet: she, on the escape from the palace; he, from a poker game at Irving Radovich's apartment. As Ann feels the effects of a sleeping pill, she rests on a brick bench near the Temple of Saturn (4th century BC) and the Arch of Septimus Severus (203 AD). That's where Joe finds her, takes pity on her and tries to take her home. Never managing to get her address, he takes her to his place by taxi. The road seen in the film, close to the ancient arch no longer exists. There used to be a road running along the northwest edge of the Roman Forum, but it has been closed for quite some time, part of it remaining as a cul-de-sac. The Temple of Saturn and the Arch of Septimus Severus are parts of the Roman Forum, a complex of the oldest and most significant constructions of the ancient city.

Why You Should Visit:
A natural follow-on from a visit to the Colosseum; an amazing place to wander through and relive the glory that was Rome.

Tip:
No secret tips needed here – it's all plain to see, although a guide is really helpful to explain the centuries of information involved.
It is also possible to hire an audioguide from a small booth just above the Arch of Titus near the Colosseum. The guide contains an audio jack meaning that two people can easily share one.