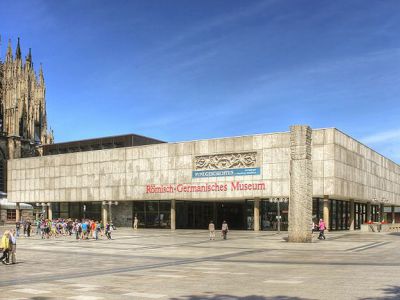 If you have been to Cologne, you would certainly have visited the Roman-German Museum, an important archaeological museum that has a large collection of Roman artifacts from the Roman settlement of Colonia Claudia Ara Agrippinensium, on which modern Cologne is built. The Römisch-Germanisches Museum, which opened in 1974, is near the Cologne Cathedral on the site of a 3rd-century villa. The villa was discovered in 1941 during the construction of an air-raid shelter. On the floor of the main room of the villa is the renowned Dionysus mosaic. Since the mosaic could not be moved easily, the architects Klaus Renner and Heinz Röcke designed the museum around the mosaic. The inner courtyards of the museum mimic the layout of the ancient villa. The mosaic covers an area of 70 square meters and is made of millions of ceramic, limestone and glass pieces. This exquisite mosaic skillfully depicts the Greek God of wine Dionysus surrounded by dancers, Pan, Cupid, satyrs at a delightful table scene. The mosaic is in a good condition preserved by the remains of the building that fell on it during the fourth century Germanic raids.

Do not miss out the reconstructed Tomb of Poblicius, a veteran who served in the Fifth Legion. This tomb stands above the mosaic and is a major attraction here. It is 15 meters high and dates back to 40 AD. Another attraction you must not miss here is the Practorium. Ruins of this palace were found recently located close to the cathedral. This palace belonged to the Lower Germania Roman governors. All other exhibits are skillfully arranged based on themes and categories. Rhine valley Roman antiquities can be found on the second floor of the museum.

Why You Should Visit:
Really worth stopping by for an hour or two if you're into Roman artifacts, as there are three floors full of things to see and entry is very affordable.

Tip:
Check out the fine mosaics dotted throughout, as well as some highly interesting decorative pieces in the cabinets.