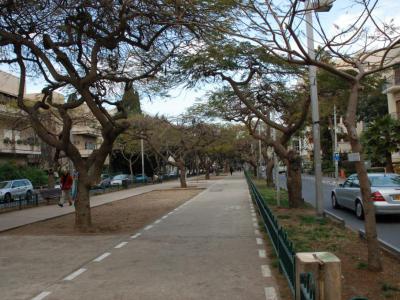 Strolling along the wide Rothschild Boulevard, you'll see lots of people of all kinds, a small pool, historical sites like the “Independence Hall” from which the 1948 Proclamation of Independence was originally read (with statues on the balcony to simulate that), and, of course, many Bauhaus buildings – some better preserved than others. Almost like all the boulevards in Tel Aviv, it has become a sort of urban park with blankets spread out on the grass and many coffee shops in the middle as well as along it.

Adjacent to the famous Engel House, one of the most visually pleasing buildings on the boulevard is the state-of-the-art Braun-Rabinsky building, which stands out for its razor-sharp lines and a thermometer-like stairwell window that's dramatically illuminated at night. At no. 71, you may spot the recently renovated Krieger House, its distinctive sunken balconies forming a strikingly attractive contrast with the façade's white surface, while at the intersection of Allenby St, you may even see a public expression of cultural/religious affinity: the large ceramic murals depict scenes of biblical agricultural activities, forming an integral part of the architecture.
Image Courtesy of Wikimedia and Izemah.