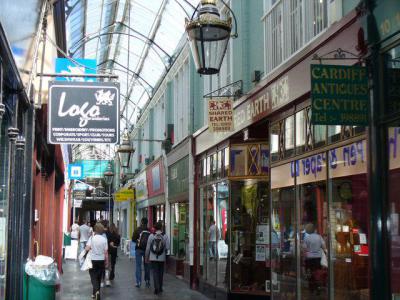 The oldest arcade in Cardiff is Royal Arcade. The Cardiff Arcade Company turned a retired slum house into the city's first arcade shopping plaza in 1858. Along with shops and eateries, the 19th century arcade was home to a free library and the Cardiff School of Art.

Royal Arcade is a Grade II listed building. It was fully refurbished in 2008 though some of the first-floor storefronts and Venetian windows were restored. Store number 29, 30 and 32 on St. Mary Street still have the original shop fronts.

There are nearly 30 shops that are currently part of Royal Arcade. Visitors can find jewelers, antiques, vintage collectibles, handcrafts, clothing and a number of restaurants.
Image Courtesy of Wikimedia and Colin Smith.