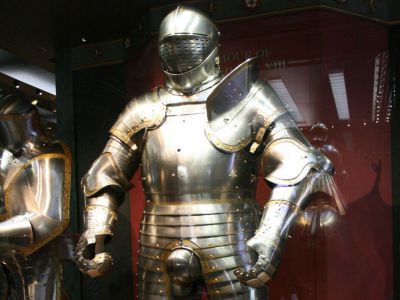 The Royal Armouries is one of the ancient institutions of the Tower of London and was originally engaged in the manufacture of armour for the Kings of England. In 1545, it is recorded that a visiting foreign dignitary paid to view the collection at the Armoury. By the time of Charles II, there was a permanent public display, featuring the "Spanish Armoury" which included instruments of torture and the "Line of Kings" - a row of wooden effigies representing the kings of England. This makes it the first museum in Britain.

From 1414, the Tower was home to the Master of the Ordnance and the Ordnance Office (later the Board of Ordnance) who were responsible for providing weapons to both the Army and Navy. The Tower was engaged in the development, manufacture and storage of a wide variety of weaponry until the Board was abolished in 1855, however the historic collection remained.

Only a small part of this could be displayed and in 1995, much of the artillery collection was moved to Fort Nelson in Hampshire and the following year a new Royal Armouries Museum was opened in Leeds. The remaining part of the collection relates directly to the Tower.

Opening hours: Daily: 10 am – 5 pm. Entry to the White Tower is free and includes the standard admission ticket to the Tower of London.
Image by Michel wal on Wikimedia under Creative Commons License.
Sight description based on wikipedia

Though all four members of the Beatles heralded from Liverpool, it's pretty fair to say that they were based in London – the center of the UK’s recording and entertainment industry. Since early in their career, it had become obvious that they had to be as close as possible to their manager's NEMS Enterprises ofﬁce, Abbey Road, as well as to the BBC and the beckoning world of...  view more

A shopping and entertainment hub on the eastern fringes of London's West End, Covent Garden is a district historically associated with the former fruit-and-vegetable market – currently a popular tourist site. While the north of the area is given over to independent shops centered on Neal's Yard and Seven Dials, the south contains the central square with its street performers and most...  view more

If there’s anything more an iconic symbol for London than Big Ben or the London Eye, then it must be the traditional English pub and London is full of them, dating from pre-Victorian times to just about five minutes ago. With so much history surrounding London there is no shortage of historic pubs to choose from.

Whether you fancy half timbered, rambling watering holes or small but perfectly...  view more

Just as his father John previously, who made way from his tiny home village of Snitterfield, Warwickshire to Stratford upon Avon to become a “gentleman”, William Shakespeare made his own way to London to become the greatest playwright this world has ever seen. The years spent in the capital largely shaped Shakespeare's writing and influenced his legacy. This self-guided walking tour...  view more

Situated just below Hyde Park, Knightsbridge and South Kensington are two adjacent neighborhoods with grand Victorian homes and leafy garden squares. The area is also a shopper's paradise featuring grand luxury stores, whereas museumgoers will find a number of excellent museums on history, science and arts. On this self guided walking tour, you will visit former Princess Diana's...  view more