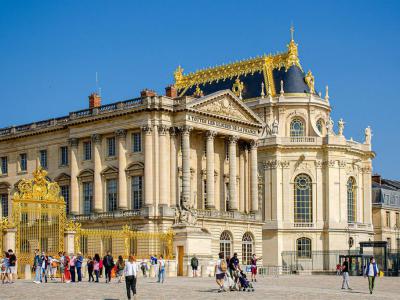 The chapel of the Palace of Versailles is an ornate early 18th Century masterpiece. Dedicated to Saint Louis, patron saint of the Bourbons, the chapel was consecrated in 1710. Its upper level, known as the “salon de la chapelle”, is decorated with white stone and a bas-relief sculpture. The floor of the chapel is inlaid with marble, while at the foot of the steps leading to the altar is a crowned monogram of an interlaced double “L”, alluding to both Saint Louis and Louis XIV. During the 18th Century, the chapel witnessed many official events. Hymns were sung here to celebrate military victories and royal births, for example. Marriages were also celebrated in this chapel, such as the wedding of Louis XV’s son Louis-Ferdinand with the Infanta Marie-Thérèse of Spain in 1745, and the wedding of the would-be Louis XVI with Marie-Antoinette in 1770.
Image Courtesy of Wikimedia and Hans Kreul.
Sight description based on Wikipedia.