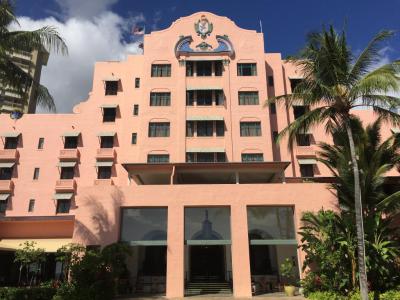 The Royal Hawaiian Hotel was one of the first hotels in Waikik when it was built in 1927. When steam travel to Hawaii became more effective, many of America's wealthiest families went to visit the island. Captain William Matson, of the Matson Navigation Company, realized that they needed a suitably luxurious place to stay. So, he decided to built a hotel in Honolulu to accommodate his wealthy passengers.

At first, he purchased the Moana mansion and converted it into a hotel. When it was successful, he went on to build the Royal Hawaiian Hotel. The hotel was designed by architects Warren & Wetmore using a combination of Spanish and Moorish architecture. The facade was done in a pink stucco, which earned it the nickname, "The Pink Palace of the Pacific."

The hotel was wildly successful since its opening in 1927. Visitors included statesmen, movie stars, Princess Abigail Kawananakoa, and Olympic medalist Duke Kahanamoku.
Image by Simon_sees on Flickr under Creative Commons License.
Sight description based on wikipedia