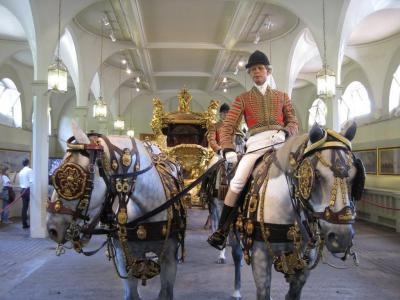 The Royal Mews is a mews (combined stables, carriage house and, in recent times, also the garage) of the British Royal Family. In London the Royal Mews has occupied two main sites, formerly at Charing Cross, and since the 1820s at Buckingham Palace. The first set of stables to be referred to as mews was at Charing Cross at the western end of The Strand. The royal hawks were kept at that site since 1377 and the name derives from the fact that they were confined there during moulting (or “mew”) period.

The original building was destroyed by fire in 1534 and rebuilt as a stables, keeping its former name while having acquired this new function.

The Royal Mews is regularly open to the public. The state coaches and other carriages are kept there, along with about 30 horses, together with their modern counterparts, the state motor cars. Coachmen, grooms, chauffeurs and other staff are accommodated in flats above the carriage houses and stables. On display there is also the carriage Princess Diana rode in to her wedding.

Mews are open Monday to Saturday from 10 am to 4 pm (last admission 3:15 pm). Please keep in mind that a typical visit lasts 1 hour.
Image by LisaThumann on Flickr under Creative Commons License.
Sight description based on wikipedia