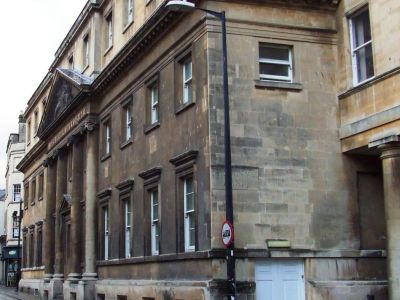 The Royal National Hospital for Rheumatic Diseases is a Grade II listed Georgian era hospital, located just off Upper Borough Walls, in the heart of Bath’s historic city centre. Still an active facility treating rheumatic and neurological illnesses, this compact hospital has played a major role in the recent history of Bath. Formerly known (and still known locally) as the Mineral Water Hospital, it was built to provide for the needs of the sick amongst Bath’s Georgian population. This was a higher proportion than in many other cities, as many sick people moved to the city, in the hope of being cured by Bath’s abundance of hot water springs.

Founded in 1738, the hospital is built from the famous sand coloured stone known locally as Bath Stone, seen throughout the city centre and surrounding streets. Designed by Sir John Wood the Elder, it was twice enlarged during the hospital’s heyday. True to its original name, the hospital continued to offer hydropathical services until 1978. As the hospital is still operational, it is not possible to tour the building, but the hospital is a worthwhile diversion just a couple of streets away from the Roman Baths and the city’s famous abbey.
Image by Rodw on Wikimedia under Creative Commons License.