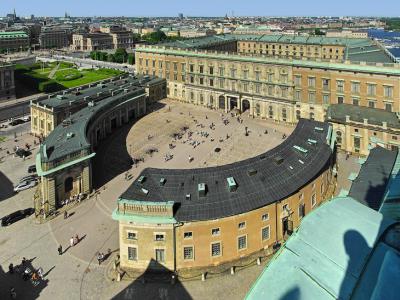 Home of the Swedish Monarchy, the Stockholm Palace is a ceremonial and formal residence of the Royal family (the actual residence is at Drottningholm Palace). This is where Sweden's King performs his mandated duties as the Head of State. The palace is flanked by other stately buildings, such as the Parliament building which commands attention worthy of the government.

The original building on this site was a fortress back in the 15th century. Under the 16th century rule of King John III, the fortress was transformed into a luxurious Baroque palace designed by Nicodemus Tessin the Younger, who was also the designer of Tessin Palace. Visitors to the palace are greeted by the Högvakten, the Swedish Royal Guard, whose history reaches back to the medieval Sweden and adds much intrigue of this majestic structure. Shaded by an exquisite copper roof, the brick edifice with sandstone facades boasts 660 windows, over 1400 rooms, several lush courtyards and is said to be one of the largest in the world.

Tip:
It's always good to go on a tour for a more personalized experience, but the rooms are well marked in English.
The treasury room, with all the regalia, would justify taking the tour as you actually get to learn about what you're looking at.
Image by Grishasergei on Wikimedia under Creative Commons License.
Sight description based on wikipedia