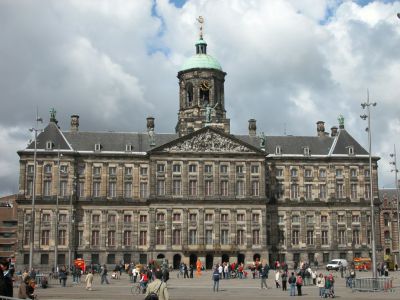 The Royal Palace of Amsterdam – sitting on the west side of Dam Square at the heart of Amsterdam, opposite the War Memorial and next to the Nieuwe Kerk (“New Church”) – is one of the four palaces in the Netherlands still left at the disposal of the Dutch Royal Family and Queen Beatrix in particular. Built in the 17th century, during the Dutch Golden Age, it was originally designed to house Amsterdam's city hall. After 150 years, circa 1808, the building was taken over by Louis Napoleon, brother of the more well-known French Emperor. Five years later, it reverted back to the Dutch and has since served as the royal palace for the House of Orange through to our day.

Visitors to the Palace are immediately struck by the grandeur of the central hall (Burgerzaal), whose high ceiling, spacious design, high columns, chandeliers and marble floors, complete with two maps of the world with a celestial hemisphere, attest to the Dutch influence and opulence of that period. As if to enhance this feeling further, the grand hall is dominated by that statue of Atlas standing with the world on his shoulders.

In many ways, this historical and architectural landmark illustrates the progression of the Netherlands as a nation. As a town hall, it highlights the importance of democracy and how it contributed to the life of the Dutch, whereas its transformation into a royal property speaks to a time when Holland was in a state of transition. Today, the Royal Palace demonstrates the Netherlands' place in the world: a beautiful, culturally rich nation attractive to many as a place to visit and live.

Why You Should Visit:
If you love opulence, loads of chandeliers and lavish ceiling decoration, this palace won't disappoint.
Very affordable for families; free entrance for under 18s plus senior and student discounts.

Tip:
Check online for opening times beforehand, as the palace may be closed for royal events.