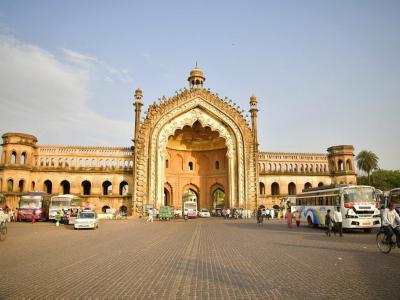 The Rumi Darwaza, sometimes called the Turkish Gate, is an imposing gateway, built under the patronage of ruler Asaf-Ud-Dowlah in 1784. It is a perfect rendering of Awadhi architecture (the Lucknow School of Architecture). This sixty-foot tall structure was patterned after the Sublime Porte (Bab-iHümayun) in Istanbul. Upon entering Lucknow in 1858 accompanying the victorious British army, Russell, a “The New York Times” reporter, called the area between Rumi Darwaza and Chattar Manzil the most beautiful and spectacular cityscape he had ever seen, better than Rome, Paris, London and Constantinople.

Tip:
Lit up during nights, it's a wonderful feeling to pass through this gate via rickshaw.
You can also find hawkers around offering elephant/camel rides.
Image Courtesy of Wikimedia and Rishabhgpt.
Sight description based on Wikipedia.