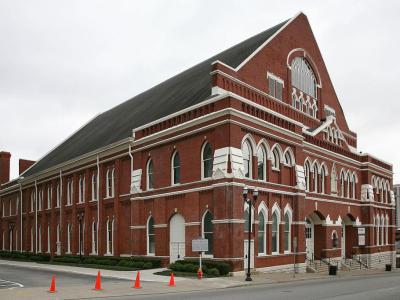 Nashville's most famous music venue, the 3,000-seat Ryman Auditorium was Architectural Digest's "most iconic structure in Tennessee" (2018) as well as being designated a National Historic Landmark in 2001. Known as the "Mother Church of Country Music" since the days of the Grand Ole Opry, the historic venue continues to book some of the best live acts in town, from just about every genre – rock, country, classical, plus comedy and more. Its hall has been praised for among the best acoustics in the world, and musicians love to show that off, often playing a number or two without a mic.

The extensive exhibits inside include photos and memorabilia of such stars as Kitty Wells, Ernest Tubb and Hank Snow, while some of the interactive videos are narrated by Johnny Cash, Vince Gill, and Little Jimmy Dickens. Among the other attractions are life-size bronze statues of Minnie Pearl and Roy Acuff; a 100-seat theater experience called Soul of Nashville; and a gift shop with a selection of recordings and souvenir merchandise.

Why You Should Visit:
Fantastic acoustics, historic site and a cozy/intimate setting. No matter who you see here, you'll have a great time.
There are numerous autographed show posters on the top floor as well as costumes and props on the main level.

Tip:
There are two options on tours; self-guided and guided. With the former you can roam about the amphitheater and balcony levels, enjoying the many displays on the auditorium, its history, and the many diverse artists and orators who have visited the stage. If you're really into it, buy the (extra-cost) guided backstage tour tickets, and the guide will take you backstage through many of the dressing rooms, with history about the place and the artists included. Ending up at the side of the stage at the control area where you can grab a pic looking out into the bowl, you are then free to roam around the rest of the place with the other visitors. Pictures are allowed everywhere except in the dressing rooms on the backstage tour.