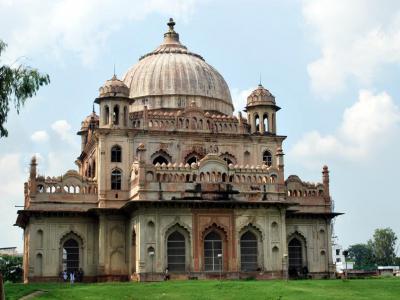 Near the Begum Hazrat Mahal Park there is Nawab Saadat Ali Khan’s mausoleum. It was built by Saadat Ali Khan's son to memorialize his father as nawab wazir of Oudh. The tomb was built in the best classical traditions of the Indo-Islamic style of architecture. Each of the belfries, as well as the main dome, is crowned with a graceful gilded finial. The floor inside the tomb is covered with black and white marble, which is rather rare for this part of India, due to the scarce marble resources and its extremely high price. The arched verandas on southern and eastern sides of the building house the graves of nawab's daughters and wives.

Why You Should Visit:
Peaceful, clean, and the beautiful garden adds a mark to its scenic beauty.