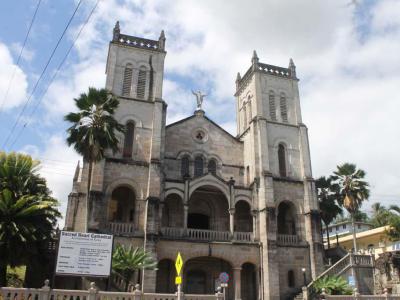 The Sacred Heart Cathedral, also known as the Cathedral of Suva, is Fiji’s most prominent Roman Catholic temple. Located on Pratt Street, its construction began 1894 but wasn’t completed until 1939, some 150 years after the first Marist missionaries arrived in Fiji. The Gothic design includes sandstone blocks imported from Australia, concrete staircases and balustrades, and two towers. The central stained-glass window, above the altar, contains an image of a bilo (coconut shell cup), beneath the Sacred Heart of Jesus.

The cathedral serves as the headquarters of the Metropolitan Archdiocese of Suva (Archidioecesis suvana), which was created in 1966 by Pope Paul VI by bull "Prophetarum voices". A crypt, completed in 1896, now contains the remains of Archbishop Emeritus Petero Mataca, who was entombed here in 2014. The cathedral is depicted on a Fiji stamp issued in 1979.

If you retrace your steps back to the Ivi Triangle and cross Scott Street, you’ll find Suva’s most distinctive art deco treasure.
Image Courtesy of Nicholas Halter.
Sight description based on Wikipedia.