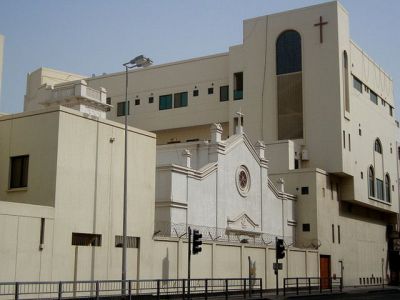 The Sacred Heart Church is a Roman Catholic parish in Manama. It is one of only two Catholic churches in Bahrain. The Sacred Heart Church serves an estimated 140,000 people. The foundation stone for the new church was laid on June 9, 1940. Within a few months, the church, the priest's residence, and a small school were built. The church was formally blessed on March 3, 1940. The parish was the first of its kind in the Persian Gulf. The church currently caters to the large expatriate population in Bahrain. The parish consists of Indians, Filipinos, Pakistanis, Bangladeshis, Sri Lankans and Arabs (mostly from Lebanon but also from Palestine and Syria). The main language used in services is English, although there are services conducted in Arabic, Malayalam, Tamil, Konkani, Tagalog, Telugu, and Sinhalese.
Image by Lulot Ruiz on Flickr under Creative Commons License.
Sight description based on wikipedia

Manama is a primarily Islamic city and is home to a number of mosques, which are each unique in their own way. The city's mosques are more than just places of worship; they are architectural masterpieces and vivid examples of Bahrain's culture and religion. Don't leave Manama without visiting the splendid mosques and religious buildings found on this walking tour.