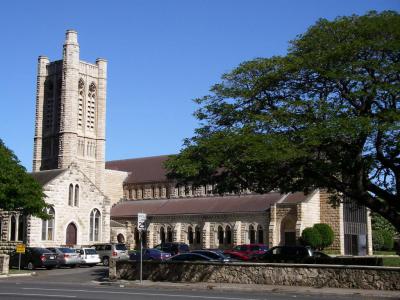 Saint Andrew's Cathedral is an Episcopal Cathedral that originally served as the seat of the Anglican Church of Hawaii.

During the Victorian Era, King Kamehameha IV and his Queen Consort, Emma, were members of the Anglican Church led by Queen Victoria. In fact, the royal couple was so close to the British Queen, she was named the godmother of their son, Albert. Kamehameha IV was inspired to build an Anglican place of worship in his own country, so he commissioned Saint Andrew's Cathedral, and donated part of the Royal Garden as the site. Unfortunately, the king passed away before the ground-breaking could commence, leaving his brother, Kamehameha V, to take over the project. The Queen traveled to England to purchase building materials, commission architects, and handle the practical matters of building the church.

The building itself was created from several pre-fabricated pieces shipped from England. It was built in the French Gothic stye, and features some very unique stained glass work. One window features an image of Jesus on a surfboard, as well as images of European explorers that visited Hawaii. Another features the Hawaiian King and Queen, Sanford B. Dole (a lawyer and jurist in Hawaii, as well as a friend of the royal family), and Bishop Thomas N. Staley.
Image by Xpixupload on Wikimedia under Creative Commons License.

Religion in Hawaii is a mix of Christianity, Buddhism and native religions. This is the reason why diverse religious structures, such as shrines or catholic churches can be seen everywhere in Honolulu. Since 1820, the Christian missionaries and Chinese began to popularize their religion and traditions. Nowadays, the ancient Hawaiian religions have almost disappeared. Take this self guided walking...  view more