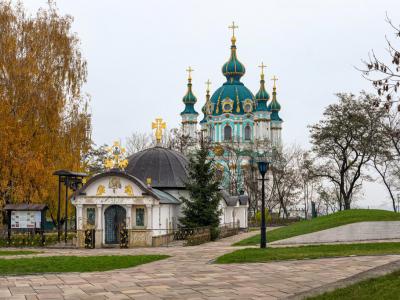 Overlooking the old neighbourhood of Podil from the top of Andriyivsky Hill, Saint Andrew’s Church is one of the most splendid pieces of Baroque architecture in Kiev. It was built between 1747 and 1754 by a team of foreign and local architects, led by Ivan Michurin, to a design by Bartolomeo Rastrelli. The church was meant as a private temple for Russian Empress Elizabeth and thus had no parish or bells to call to masses.

Because of its location on the hill, the church is placed atop a two story stylobate which also acts as a foundation for the building. Shaped as a cross, Saint Andrew’s has one dome and five decorative spires. The interior and exterior were finished simultaneously, thus adding unity to the whole ensemble.

Right from its inauguration and until the recent times, Saint Andrew’s has endured many problems; among them losing the original cupolas to a violent storm in 1815 and closure by the Soviets in the 1930s. In 1992, the Kiev Patriarchate of the Ukrainian Orthodox Church took over the stylobate, and then assumed a complete ownership of the building on its 255th anniversary. Today, services are still held inside the church but at irregular times.
Image Courtesy of Flickr and Jorge Franganillo.