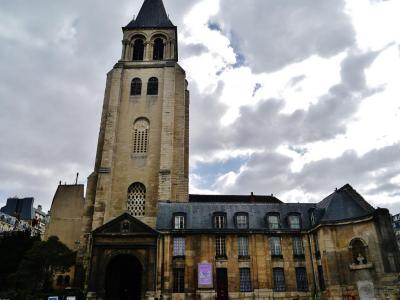 The oldest church in Paris, Saint-Germain-des-Prés was established by the son of Clovis I, Childebert I (ruled 511–558) on the site of a small marketplace, as the linchpin of an important abbey complex, and was meant to house the True Cross relic, brought from Spain in 542. In the Middle Ages, the church grew very influential as both a religious and cultural institution. Although eventually, the abbey was totally destroyed by the Normans, the church itself has survived with the suffix "des préso" indicating that it was out in the meadows beyond the city limits.

In 1163, it was expanded and re-consecrated by Pope Alexander III. The new building is an excellent example of Romanesque architecture. The square tower, dating back to the early 11th century, is topped by a 19th-century landmark spire. Inside the church are a Romanesque nave and a Gothic choir with gilded capitals. The marble columns are the only survivors of the 6th-century abbey church, which was once a pantheon for Merovingian kings. The pillars are carved with copies of the capitals, the originals of which are kept in the Musée National du Moyen-Age.

Why You Should Visit:
On entering this church you are struck by how colorful the walls and ceiling are. Very beautiful interior. Also, the small park space outside is a nice peaceful place to sit and relax for a while.
As with many Parisian churches, concerts and recitals are often held here, many featuring Gregorian chant – and enhanced by the church's fantastic acoustics and medieval ambiance.

Tip:
Once inside, be sure and let your eyes travel from the base of the columns all the way to the ceiling. Every inch/centimeter is decorated!