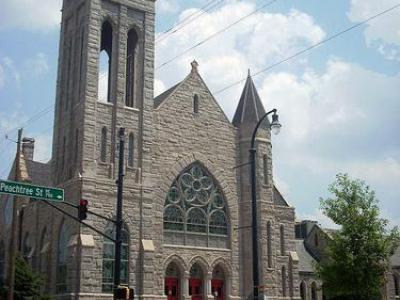 One of the few Gothic Revival granite churches left in Atlanta is the Saint Mark United Methodist Church in Midtown. The building was constructed between 1902 and 1903 by the congregation of Merritts Avenue Methodist Church after they outgrew their previous house of worship.

The architecture is notable for its use of Stone Mountain granite, triple entrance portal, and twelve pictorial pot-metal stained-glass windows depicting scenes from the life of Jesus; the latter were installed gradually from 1909 to 1959. The building itself is listed on the National Register of Historic Places, and is also designated as a historic sight by the City of Atlanta.

The architect, Willis F. Denny, also constructed two other granite Methodist churches that survive today. The congregation chose this location to give themselves more room and to be in a less dangerous position than the "Tight Squeeze" area beyond the city limits.

In the early 1990s, the church was on the verge of closing but the congregation ended up swelling to more than 1700 members during the decade. It is now a diverse community for young and old, single and married, and those of various gender identities. A fifteen-year series of renovations to the main sanctuary was completed in 2008.