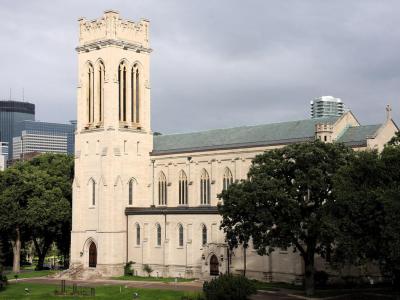 Saint Mark's Episcopal Cathedral in Minneapolis, is one of two cathedrals in the Episcopal Diocese of Minnesota. It was built as a parish church overlooking Loring Park in 1910. In 1941, it was designated a cathedral when the bishop's office moved to Minneapolis from the Cathedral of Our Merciful Saviour in Faribault.

The cathedral hosted the first World Congress of the Anglican Communion to be held outside of the United Kingdom in 1954, and hosted the 1976 General Convention in Minneapolis which officially accepted the ordination of women as priests and adopted the current Book of Common Prayer used in the United States. In 2003, St. Mark's hosted the General Convention at which the election of Rt. Rev. V. Gene Robinson as Bishop of the Diocese of New Hampshire was confirmed, making him the Episcopal Church's first openly gay, noncelibate bishop.

In 2007, following the collapse of the Interstate 35W bridge in Minneapolis, St. Mark's hosted an interfaith service of healing. On June 1, 2008, St. Mark's celebrated their 150th anniversary as a parish church with a celebratory mass. There is a Biblical garden on the cathedral grounds. Composer Stanley R. Avery was choirmaster and organist at St. Mark's Church from 1910 to 1950.
Image Courtesy of Wikimedia and Jonathunder.
Sight description based on Wikipedia.