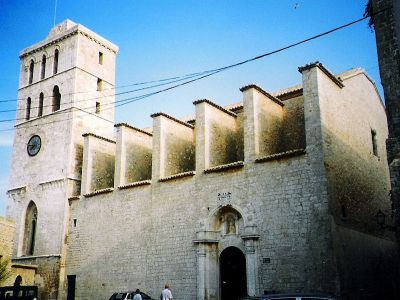 The Saint Mary of Ibiza Cathedral is a major landmark on the island. It has stood at the top the old town of Ibiza since the 13th century. Once you step inside the walls of the Ibiza's historical quarter, your eyes are instantly drawn to the imposing fortified walls of the church.

Following the Catalan Conquest in 1235 when the Christian conquesters ousted the Moorish from “Yebisah”, a grand cathedral was commissioned for the town. It is said that the church was built upon the site of a former Moorish mosque, which was a common practice in colonial Spain to impose the Christian faith to the local population.

The Gothic style tower and chapel are part of the original construction and the interior of the church was redone in the Baroque style in the 18th century. The ancient Monstrance made of silver and gold and dating from 1399 is the cathedral’s most treasured artifact.

The eye-catching Madonna, known as Our Lady of the Snows, is another key feature of the cathedral. Inside the cathedral there is a Diocesan Museum where you can learn more about the church’s historical influence in Ibiza. Admission is free.
Image by Jaume Meneses on Wikimedia under Creative Commons License.