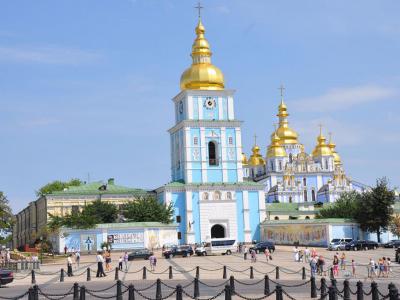 Saint Michael’s Golden-Domed Cathedral, one of the city's most impressive architectural monuments, has a rich and tumultuous history. Its foundation was laid in 1108, by the sons of Grand Duke of Kiev, Izyaslav Yaroslavovich. In 1113, the Byzantine style cathedral was inaugurated under the aegis of Demetrius’ Monastery. A series of Mongol attacks in the later centuries inflicted great damage upon the cathedral so that by the 15th century it was in much need of repair. In 1495, the cathedral was renamed Saint Michael's in homage to Archangel Michael, the spiritual patron of Kiev.

Over the course of 18th century restorations, the cathedral was enlarged and its exterior remade into Baroque style. Partially because of that and also due to the Soviet authorities' often unfavourable stance on Christianity, the cathedral was sentenced to demolition in 1934. The edifice was fully restored in 1990, based on the old images and partially relying of the preserved original foundation. The architecture and the interior decorations resemble the original. Some of the old cathedral's relics, such as paintings, mosaics, etc., have been restored or returned to the new building.

Other than the cathedral itself, Saint Michael’s Golden-Domed complex includes a number of religious sites, namely: the Economy Gate (built in 1790), the Bell Tower (1716-1719), and the Refectory of St. John the Divine (1713).
Image by Explorer Travel on Flickr under Creative Commons License.