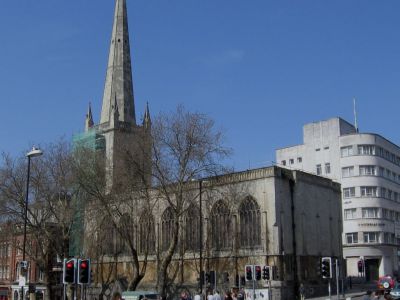 St Nicholas is a church in St Nicholas Street, Bristol. The first church was founded before 1154, with a chancel extending over the south gate of the city. The gate and old church were demolished to make way for the rebuilding of Bristol Bridge and the church was rebuilt in 1762-9. Part of the old church and town wall survives in the 14th century crypt. The interior was destroyed by bombing in the Bristol Blitz of 1940 and rebuilt in 1974-5 as a church museum, which has now (2007) closed and the building is used by the city council as offices. The building still holds statues of King Edward I and King Edward III which were removed from Arno's Court Triumphal Arch. The original statues were taken from Bristol's Lawfords' Gate that was demolished around 1760. Other statues are 13th century figures from Bristol's Newgate representing Robert, the builder of Bristol Castle, and Geoffrey de Montbray, bishop of Coutances, builder of the fortified walls of Bristol. They were moved to the church, due to their deteriorating condition, in 1898.
Image by William Avery on Wikimedia under Creative Commons License.
Sight description based on wikipedia