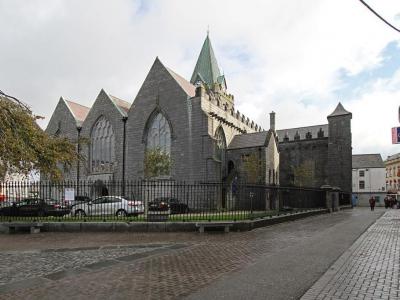 For seven hundred years or more the medieval Collegiate Church of Saint Nicholas has served Galwegians. It is surrounded by the stalls and canopies of Galway market on market days as it has been since 1320.

In the 16th century, The two most powerful families, the Lynches and the Frenches extended and enlarged the church. Each built side aisles to the nave. The result is a square inside and three roofs.

Inside is a memorial of Jane Eyre. In 1760 Jane donated 300 pounds to the city corporation to feed 36 hungry people. Whether they ate or not is unknown. Also unknown is the fate of the 300 pounds. Very young James Kearney was killed by a horse and cart while playing in the street. He is remembered.

Adam Bures, a Crusader who died in the 13th century, has a gravestone here. There is a lepers gallery high above the north aisle. Two mermaids, a dragon, a lion and an ape grace the outside of the church. Stone gargoyle heads peep over the roof edge.

Christopher Columbus visited the church in 1477. At the same time two Inuit travelers, blown by unfavorable winds, arrived on the west coast. In 1652 Cromwell's troops trashed whatever they could, but the church carried on.

The Galway Market is open all year on Saturdays and Sundays. It features a lavish mix of foods and arts and crafts. Clothing, Jewelry and some household goods are also available.
Image Courtesy of Wikimedia and Gerd Eichmann.