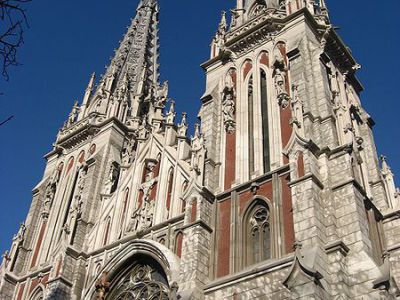 Saint Nicholas' Cathedral in Kiev is a Roman Catholic temple, second best-known after Alexandr’s Cathedral (built in 1842). This Gothic style temple was built in commemoration of Tsar Nicolai II’s visit to Kiev. The building is fronted by two 60 metre (197 feet) towers with delicate carvings in artificial stone and beautifully coloured glass windows. The cathedral is the first to be built using the bore-and-stuffed piles for added stability on the uneven and unstable Kiev surface. A three story house to the left shows the same architectural style. It used to accommodate the clergy who served at the cathedral.

The construction of Saint Nicholas' started in 1898 and lasted until 1909, upon which the cathedral was inaugurated and got its name. St. Nicholas' had functioned as a religious site until 1938, when the Soviet government ordered its closure and converted the building into the NKVD (security service, preceded the KGB) headquarters. During 1978-1980, the cathedral underwent profound restoration and was turned into the National House of Organ and Chamber Music of Ukraine.

As of 1992, it has hosted various concerts, cultural events and religious masses. The building is still affiliated with the Kiev Municipal Department of Culture, yet the Roman Catholic Church seeks to have it returned to the rightful owner, which is the local Latin rite Roman Catholic community.
Image by Andriy Makukha (Amakukha) on Wikimedia under Creative Commons License.