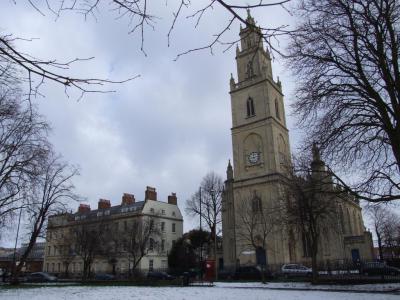 It was designed by Daniel Hague although the original St Paul's Church was to be designed by James Allen in a Greek style. St Paul's became known as the Wedding Cake Church from the unusual tiered tower. The tower was designed to hold a ring of ten bells, however only four bells were purchased, all cast by John Rudhall of Gloucester, two in 1792 and the 6th and tenor bells of the proposed ring in 1795. The church is now a redundant church in the care of the Churches Conservation Trust. It was declared redundant on 1 November 1988, and was vested in the Trust on 1 April 2000. In 2005 the church was converted into its present form as the home of Circomedia, a circus school, but remains consecrated. It still boasts an ornate Georgian plaster ceiling, stone columns and a wealth of decorative stained glass, but has now been equipped with aerial and trapeze equipment and a pale Maple wood sprung dance floor. On 19 October 2007, it won the international RICS Community Benefit Award 2007.
Image by Joe D on Wikimedia under Creative Commons License.
Sight description based on wikipedia