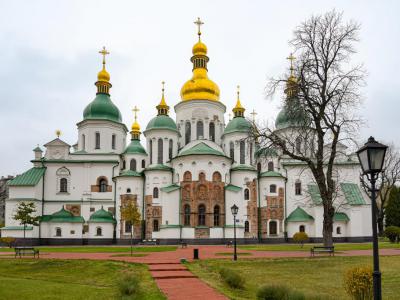 Saint Sophia’s Cathedral is one of the most important cultural, religious and architectural landmarks of Kiev. Built in the 11th century (1011 or 1037, according to various sources), the cathedral was inspired by the Hagia Sophia in Constantinople and was meant to become a regional centre of Christianity. Initially, the cathedral had five naves and two circling galleries. It was badly damaged during Tatar invasions in the Middle Ages and later, in 1707, was rebuilt in a Byzantine style, most common among the Ukrainian orthodox churches. Over the centuries afterwards, Saint Sophia’s underwent many restorations and improvements.

Today, it boasts 13 cupolas and an impressive interior. Most of the mosaics and frescoes on the inside date back to the 11th century and depict religious and laic scenes, including those featuring Kiev's Prince Yaroslav and his family. The scenes are displayed in an ascending order, with the largest ones and most important from religious standpoint appearing on the domes. About 300 graffiti originated in the medieval period have been uncovered on the cathedral's walls during restorations, providing historians with an invaluable source of information about political and social life of that period.

The cathedral is now a museum and a cultural venue. Because of the tensions between two Ukrainian orthodox rites, it is temporarily not used for religious service. The cathedral was declared a world heritage site by UNESCO, along with the Kiev Pechersk Lavra, in 1990.
Image by thisisbossi on Flickr under Creative Commons License.