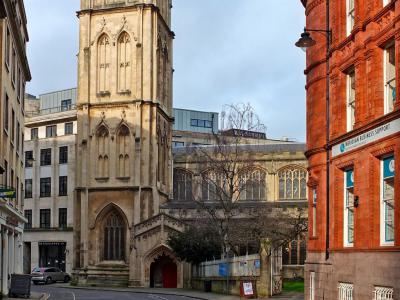 The site was on the banks of the River Frome, which was diverted at around this time to create Bristol Harbour. The clerestory was repaired after a storm in 1703. The aisle and east windows were restored in 1873. The tower measures approximately 18 ft by 20 ft at its base, and rises to a total height of 152 ft. It originally contained six bells but these have been replaced over the years and the number increased to twelve. The tower is typical of Somerset churches, but with the addition of a "Gloucestershire crown" of arcaded battlements, pinnacles and open-work arcading. The 15th-century brass eagle lectern and the iron sword rest by William Edney of about 1710 were moved to St Stephen's from St Nicholas church, which was damaged in the Bristol Blitz.
Image by Dave Napier on Wikimedia under Creative Commons License.
Sight description based on wikipedia