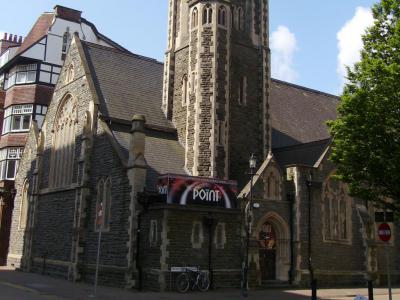 The church was constructed in 1900 to replace a temporary iron frame church and opened as the chapel of St. Mary's. In 1912, it became a separate parish under the name of St. Stephen. The parish was deconsecrated in 1992 and the church was used as a community centre and theater until 2001, when it was purchased by its current owners. Tremendous renovations in 2003 transformed the church into a venue for live music performance and regular club-nights, including Bogiez. The entire building was restored and much of the original architecture was kept, including all the stained glass windows.
Image by Seth Whales on Wikimedia under Creative Commons License.
Sight description based on wikipedia

Cardiff has plenty to entertain those who travel with the shopping bags in tow. Locals often call it the "City of Arcades", meaning you can delve down centuries-old alleyways that are bursting with boutiques and jewellers and vintage clothes emporiums, all while sampling locally roasted coffee beans and hopping independent brunch venues. Explore Cardiff's well-preserved and still...  view more