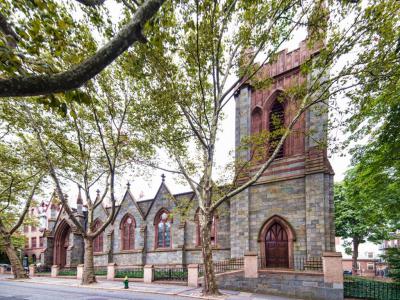 St. Stephen's Church is a historic Episcopal church in the midst of the Brown University campus, and an active parish in the Episcopal Diocese of Rhode Island.

The parish was established in 1839. As it grew bigger during the 1850s, the need for a larger and more centrally located church became apparent. Pursuant to that, in 1860 the parishioners bought a plot of land on George Street on which the architect Richard Upjohn, one of the pioneers of the Gothic revival in the United States, designed a temple in the Middle Pointed or Decorated style.

At the southeast corner of it stands the Church Tower, designed by the local firm of Hoppin and Ely, and completed in 1900. Capped by four pinnacles and a conical copper spire, it stands 93 feet high. The tower contains a set of 15 Tubular Chimes, installed and blessed in 1902, the largest of which weighs almost 230 pounds.

At the third floor on the front of the building, standing in a niche behind protective glass, is a Statue of Saint Stephen. Carved in oak, the main doors of the church contain figures (left to right) of King Solomon, Saint Stephen, Saint Paul, and the Prophet Ezekiel. These were donated in 1928 (along with the Rose Window above) as a memorial to the Rev’d Dr. George McClellan Fiske, who served as Rector at S. Stephen’s from 1884 to 1919.

The building was listed on the U.S. National Register of Historic Places in 1973.
Image by Kenneth C. Zirkel on Wikimedia under Creative Commons License.
Sight description based on wikipedia