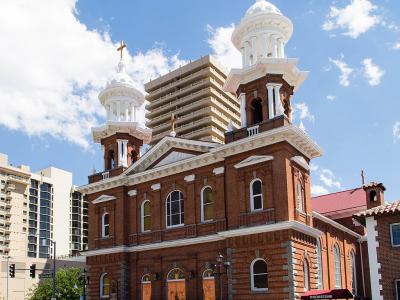 Saint Thomas Aquinas Cathedral is the mother church of the Roman Catholic Diocese of Reno. It is located at 310 W. 2nd Street in Reno. On May 21, 1906, Catholic officials purchased the Sol Levy home at the corner of Second and Chestnut (now Arlington) streets in Reno for $10,000 to be the site of St. Thomas Aquinas Cathedral. The cornerstone was laid in June 1906 and the cathedral was dedicated June 21, 1908. A fire on Dec. 21, 1909, caused major damage, including collapse of the ceiling, but it was salvaged and reopened in 1910. A renovation conducted in the 1950s added a wraparound mural that surrounds the altar. As of 2010 the Cathedral is undergoing another restoration. The Cathedral is staffed by Conventual Franciscans: Order of the Friars, Minor.
Image by kun0me on Flickr under Creative Commons License.
Sight description based on wikipedia

This sight is featured in a self-guided walking tour of Reno, Nevada within the mobile app "GPSmyCity: Walks in 1K+ Cities" which can be downloaded from iTunes App Store or Google Play. Please download the app to your mobile phone or tablet for travel directions for visiting this sight. The app turns your mobile device to a personal tour guide and it works offline, so no data plan is needed when traveling abroad.

In keeping with Nevada's overall gambling theme, Reno – nicknamed “The Biggest Little City in the World” – is big on casinos, as well as ski resorts. However, there's more to Reno than just that. If you're into cars, downtown Reno hosts the National Automobile Museum featuring over 200 vintage cars for your enjoyment. To see what else the city of Reno has to offer, follow...  view more